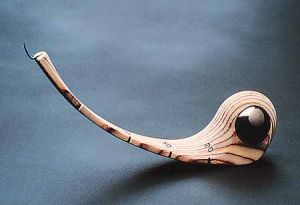 A beautiful design of a letter scale rolling towards an equilibrium, is "Balanssi" designed by Manne Kuva from Finland. In 1998 he took part in a design contest called PUUN AIKA, Era of Wood. The designs of wooden objects was intended to be gifts for VIP's who would come to visit Helsinki, as the European Cultural Capital of the year 2000. Manne Kuva used laminated wood, a steel ball and a little steel pin. Unfortunately, only one specimen exist. (Letter scale in Finnish is kirjevaaka).

The American John McMillan designed a pleasing combination of a bird mobile and a letter scale. The bird is a goodlooking object. You don't have to look for your letter scale, it's always good visible and ready for use. The design is protected by an American patent since April 20 1999. Three different birds are available: the pelican presented here, the bald eagle and the great blue heron. Still for sale at 44.50 US Dollars plus S&H.

The old Archimedean principle was put on the stage again with the undermentioned letter scales. The scales are pleasing the eye, but are unpractical in use, a characteristic of many modern design. To preserve the range of weighing, a regular refill of water is necessary. The accuracy of weighing leaves much to be desired because the floating cylinder is dragged along the interior wall of the outer cylinder. To reduce friction and improve gliding of the cylinder, it is recommended to add a small quantity of household cleaning-agent to the water. To prevent calcification one should use distilled water. Or, if not available, put a few drops of vinegar into normal water, this will do the job as well. Dr Haag claims an accuracy of ± 2 grams. In 1786 Samuel Miller got a British patent, with number 1545, for a much larger design of this scale. In fact it had to serve to weigh cattle at the cattle-market of London. J. Deschamps got a British patent, with number 3171, for a hydraulic balance in 1879. According to one source, Equilibrium pp.509-510, even older (British?) patents on hydraulic balances exist. In Germany Dr Haag made his apply for a patent in 1982. This was published in 1983 under the German patent number 3206959 A1. Ultimately, the patent was granted in July 1986. This scale is manufactured and marketed by M&M -made in W.Germany- with article-number 687-5 as universal balance. In the Netherlands (in 1990/1991/1993?) Arnout Visser presented his Archimedes letter scale. The dimensions and materials are slightly different. Dr Haag uses fragile hard plastic. Visser applies the more durable and much more expensive Pyrex glass.

The Dutch mail services presented the rocker letter scale. This very handy letter scale was temporary a free gift in 2000. The scale made of strong cardboard, was presented in a folding form.