The very first weighing instrument, an equal-armed beam balance, dates back to a good 6000 years before Christ. In the old civilizations around the Mediterranean Sea, gold dust was used as a means of payment, and was therefore weighed out as accurately as possible. The Babylonians already used strict rules for weights and measures. They compared their weights with those used by priests.

The initial postal services used a rate system based on the number of sheets of paper and on the distance to cover. In after years, and initially not in every country, the base of the rate system switched to the distance covered, and the weight of the letter. Payment was made on delivery. Under Kaiser Maximilian of Austria, Franz von Thurn und Taxis maintained an extensive mail service in large parts of Europe ever since 1504. Thurn & Taxis stayed active with the postal services until the beginning of the era of stamps.
In the eighteenth century a weighing balance (pair of scales) was used to determine the weight of the letter.

The introduction of the English Postal Act in 1840 (Uniform Postal Act of Sir Rowland Hill) was the starting point of an excellent mail system. The first stamp, the Penny Black, dates from May 1840. You now can mail a letter not exceeding half an ounce (±14 gram) in weight from any part of the United Kingdom to any other part for just ONE PENNY if paid when posted, or for TWO PENCE if paid when delivered.

In 1863 a postage rate based on weight, was introduced in the United States. Not until 1871 Germany gets a more uniform postage system. Previously, the country was a varied collection of smaller and larger states, each one with their own postal system.
In the Netherlands courier services also transported letters. Those letters were stamped. The oldest Dutch stamp (three stuiver-stamp) dates from 1667. In 1752 the province Holland started the States Mail Services. In 1799 the state took the monopoly, and the postal services became the National Dutch Post. In 1850 a Dutch Postal Act was introduced. The first Dutch stamp dates from 1852. The postal rate based on weight and payment before delivery, was introduced in 1871. With the foundation of the Universal Postal Union (Union Postale Universelle, Wereld Post Vereniging) in 1874, the international mail traffic got streamlined significantly. 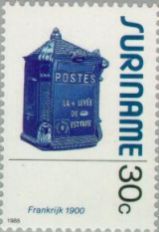 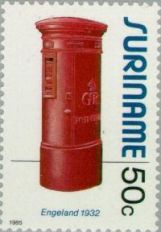 The first specific letter scales - also called postal scales, postage scales, letter balances, postal balances -, date from 1839. The introduction of the English postal amendment act in 1840 (Uniform Postal Act of Sir Rowland Hill) could be classified as the number one catalyst of letter scales development. The availability of a good mail system, with the forward sales of stamps and the pillar-boxes at streets, make it sensible for private persons also to invest in a letter scale. The industrial production of letter scales in the United Kingdom gets well under way after 1840. In Germany and the United States of Anerica it took a little longer. The first six letter boxes were erected in London only in April 1855. This after a successful experiment in Jersey in 1852. Anthony Trollope is the designer of the first British post box in 1854. By 1900 there were 32,593 letter boxes in the United Kingdom. In the Netherlands public mail boxes arrived at the streets after 1869. The design dates from 1850. As early as 1616, a couple of mail boxes were hanging in Amsterdam to collect letter mail bound for Hoorn and for Enkhuizen. 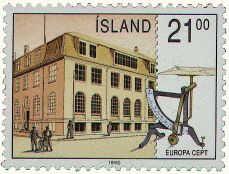 Hundreds of different letter scale designs were made. Of some of them, only one unique specimen exists. Production series of the early designs were relatively small. Of the old names of manufacturers only a few survived until today. Such as Jakob Maul and Kern in Germany, Fairbanks in America, Salter and Avery in England. Dozens of patents of fortunately never made letter scales do exist. Often the designs are plain ugly, are unnecessary complicated, and above all, promise to be unhandy and cumbrous in daily use. Whatever had come over the inventor to apply for a -surely not for free- patent, often remains obscure. The older types of letter scales are of course predominantly mechanical. The accuracy of weighing is limited mostly. Electronic letter weighing machines exist since 1970.