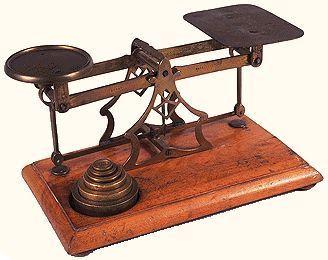 The weight-class of a letter is determined by placing loose weights on the opposite plate. The arms of the balance are even in length. There is no chart. For the determination of weight and postage, a set of loose weights is available. The weighing is basically the comparison of the letter-weight with one or more of the weights of the set belonging to the balance. Is the letter lighter or heavier than X?

Sometimes an addition of the weights placed on the scale is necessary. The beam scale, an equal-armed beam with the pans suspended below the beam, is the oldest form of weighing device. The design of the equal-armed balance with easily accessible top-pans is made by the French mathematician Gilles Personne de Roberval and dates from 1669. The horizontal arms together with both vertical pan supports, make a parallelogram. In this way the pans will stay horizontal in the full range of movement. Mostly, the upper horizontal beam is engineered as a double beam. In 1849 the French scale engineer Joseph Béranger presented an improved equal-arm top-pan balance. In this design the pans are supported at multiple spots.

This type of balance has one movable weight, or two. The smaller second weight is to be used for more precise weighing. The weight is attached slidable to the beam. This weight, acting as a counterweight, is moved along the beam to the equilibrium position. The beam has a chart of weight graduations. This type of scale is also referred to as steelyard or as bismar. There are table models and hand held models.

A spring delivers the balancing force. The weight or postage is directly read off the chart. This scale is self-indicating. There are table or desk models and hand held models. The simple spring balances make use of an extension or a compression coiled spring which is placed in line with the load to be determined. (direct = 1 on 1). Because of the resemblance, the English call certain compression spring balances candlesticks. The more complex spring balances have a mechanism between the load and the spring. (indirect = not 1 on 1). In other more heavier types of spring balances different spring types are used. Mostly these are too gross for weighing letters. In the robust Mancur scale a flat band ring is applied. This scale is suited for rough weighing only and was especially used in the farming industry. The sector balance also utilizes a flat band spring. Besides scales with elliptical, bow, and torsion springs do exist.

A fixed counterweight - the round part on the photos - delivers the balancing force. With this type of scale the weight or postage is directly read off the chart also. This scale is also self-indicating. This type is also referred to as inclination balance, or as quadrant scale. There are table or desk models and hand held models. Most of the pocket scales belong to the last mentioned group of models. Double pendulum letter scales are known also.

Each category lodges many different designs and constructions. Naturally, exceptions do exist: those scales with a few distinguishing features out of two above mentioned groups. Besides, since ± 1970 electronic scales with digital output exist. I consider this digital group to be totally not interesting. On the other hand, I think the category "specials" is very interesting. I classify all non-traditional, non-electronic scales within this group. For instance, letter scale designs whereby rocking is used as the indicator of postage border crossing. A recent example comes from the Dutch mail services: PTT-Post. The water scale or the hydraulic letter balance or the Archimedes scale also fits in this category. 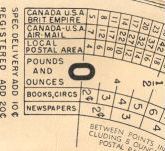 Pure letter scales, that is balances strictly made for weighing letters, were fitted with a scale on which the postal rates were inscribed. This was common in the first decades wherein postal rates remained constant for several years. Apart from the inland rates, some scales also showed the rates for books and for newspapers. Sometimes the rates for colonies overseas and or rates for foreign countries are given as well. Of course, scales with this type of inscribed plates delivered problems when postal rates were updated.

A single scale factory even has introduced a system with changeable charts to make adjustments to rate changes possible. Also scales do exist with charts showing the weight indications and as a service to the user, the postal rates engraved in one of the scales. In after years postal rates changed more frequently, and most of the scales with engraved rates disappeared. The postage rate charts on letter scales are a good indicator to the date of the scales.

The weighing plateau of pure letter scales is flat. In the household it is often more convenient to have a basin-shaped scale at one's disposal, for instance to weigh liquids or flour. of a lot of old scales both variations exist. Strictly, the more recent letter scales should be referred to as gram scales, because they are suited to weigh a lot more than letters only. The divisions of charts, the graduations, are various. Often a line of measure per 5 grams is used. Pendulum scales with a double weighing range (those with a turn-over, semi-fixed counterweight), have a graduation per 1 grams in the lower range and per 5 grams for the higher range.
Many pendulum scales have a three legged base frame (tripod). Placed on an inclined surface, the scale can be adjusted to zero with a leveling screw. The leg with this screw is situated in the plane of movement of the scale mechanism. Model Fertig of the German scales manufacturer Ph.J. Maul has the indicator-needle and the chart with divisions rotatable mounted on the same axis. In this way this balance requires no separate leveling adjustment, it adjusts itself automatically on zero. But during weighing, it takes an irritating long time before the indicator comes to rest and a good reading off the chart is possible. Of most of the pendulum scales the zero adjusting screw is an ugly, detonating addition, e.g. look at the Rictus made by Ph.J. Maul. The more complex, and therewith more expensive, design with the double pendulum, like the Columbus Bilateral also made by Ph.J. Maul, doesn't require a leveling screw. Unloaded this model with contra-rotating pendulum parts, always indicates zero, even in seriously sloping positions.
There are pendulum scales of which the chart is fixed at the frame and the indicator, or pointer, moves with the mechanism when loaded. Also, the reverse exists: the chart moves with the mechanism along a frame-fixed pointer. With the double pendulum scales, called bilateral pendulum scales, the pointers as well as the charts, move when loaded.
Some rare pendulum scale designs have a total circle as chart. Most of the pendulum scales have a chart with the form of a part of a circle, the size is almost a quarter. Therefore these pendulums are also called quadrant scales. The counterweight of some pendulum scale models is semi-fixed. It's rotatable to a stable second position. Herewith these scales have two separate weighing ranges.