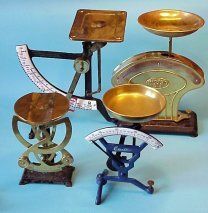 My collection as yet exists mainly of pendulum scales. The firm Philipp Jakob Maul of Hamburg in Germany produced most of them. This firm was established in 1874. In 1943 the factory was bombed level to the ground. The production of scales restarted in 1948. The firm survived until August 1989. The firm is also known under the name Ph.J. Maul and under the mis-spelled name Philipp Jacob Maul.
Another firm with the same family-name, namely Jakob Maul, also produces letter scales. This firm was established in 1912 in Hamburg. In 1913 the firm moved to Bad König-Zell where the production of office supplies was started. Only in about 1930 Jakob Maul started its own production of letter scales. Today, letter scales are still made. Both firms have put an extensive series of models on the market. Several models got their own distinctive name, sometimes even a separate logo, and mostly the Maul logo, see marks.

I made a geographical based partition of my collection:

part 1. European scales (each photo links to a window with additional information).